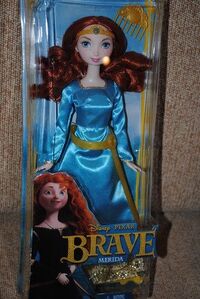 The Princess Merida doll is a hard-bodied and hard-limbed Barbie-style doll from Mattel. She is outfitted in a long turquoise gown, and given the wild red hair as shown in the movie, Brave.

The doll was released in spring of 2012, and announced in February of 2012, to correspond with the release of Brave. It is expected to be a very hot toy for summer 2012.

Retrieved from "https://toys.fandom.com/wiki/Princess_Merida?oldid=4305"
Community content is available under CC-BY-SA unless otherwise noted.